We interrupt this broadcast to bring you an important transmission from the online MTG World.

This blog has unlocked a very unique achievement: being referrenced in *the* Old School Blag!!!

The project is now 90,5% completed and this feels like a tremendous achievement!!!

Major changes have happened: back in September, I was thinking about the project and realized – I collect Richard Garfield signed cards since 2005, but this “Old School” project is only 65% complete… I’m not sure I want to dedicate another ten years before I can finally reach 100%!

So I took another look at my collection and I thought hey, what if I went beyond Old School (which I kinda-sorta already did since the last update anyway, including cards from Alpha up to Tempest…) and went “Old Frame” instead? What if any card printed before Mirrodin in 2003 was welcome in?

Yep, that’s right. 90,5% completion as of today!!! And the Cube still has this very cool nostalgia feeling, to stay consistent with its original philosophy.

I still need a number of cards in Green and Black. Also a couple in White. But I’ve never been closer to the goal!

Alright, where are the last gems hiding? The hunt is on!

Last but not least – recent additions since the last update:

Alright, I did a bit of a political trickery here and I played with the stats: I decided to allow every MTG set from Alpha until… Tempest (released in 1997)! Which makes lots of sense, since Richard Garfield actually worked on its design.

I also came up with a new project – I am building a new Old School deck called “Story Time” (yeah I know, booh netdecking!). I think it is very consistent to play an OS deck that actually features a playset of Garfield’s favorite card. I was lucky enough to find three copies of Shahrazad over the last year and I’m only looking for one last copy to complete my playset!!!

In order to complete the deck, I also need to find the following cards signed by The Creator, so if you can help me out, please let me know!

There is a new feature in this blog – I created a new page called “TRADES?”, located under “EXTRAS”. It’s a comprehensive list of every card I own with the precious signature, and which are available for trade against other signed gems. If you have anything for me, and you would like something else from me, please check it out:

One other  thing worth mentioning, I made some pretty amazing trades recently with some fantastic people – thank you all for your help! It goes a long way toward the achievement of my end goals. You rock!  🙂

And finally, here is a list of the cards I added to my collection since the last update: 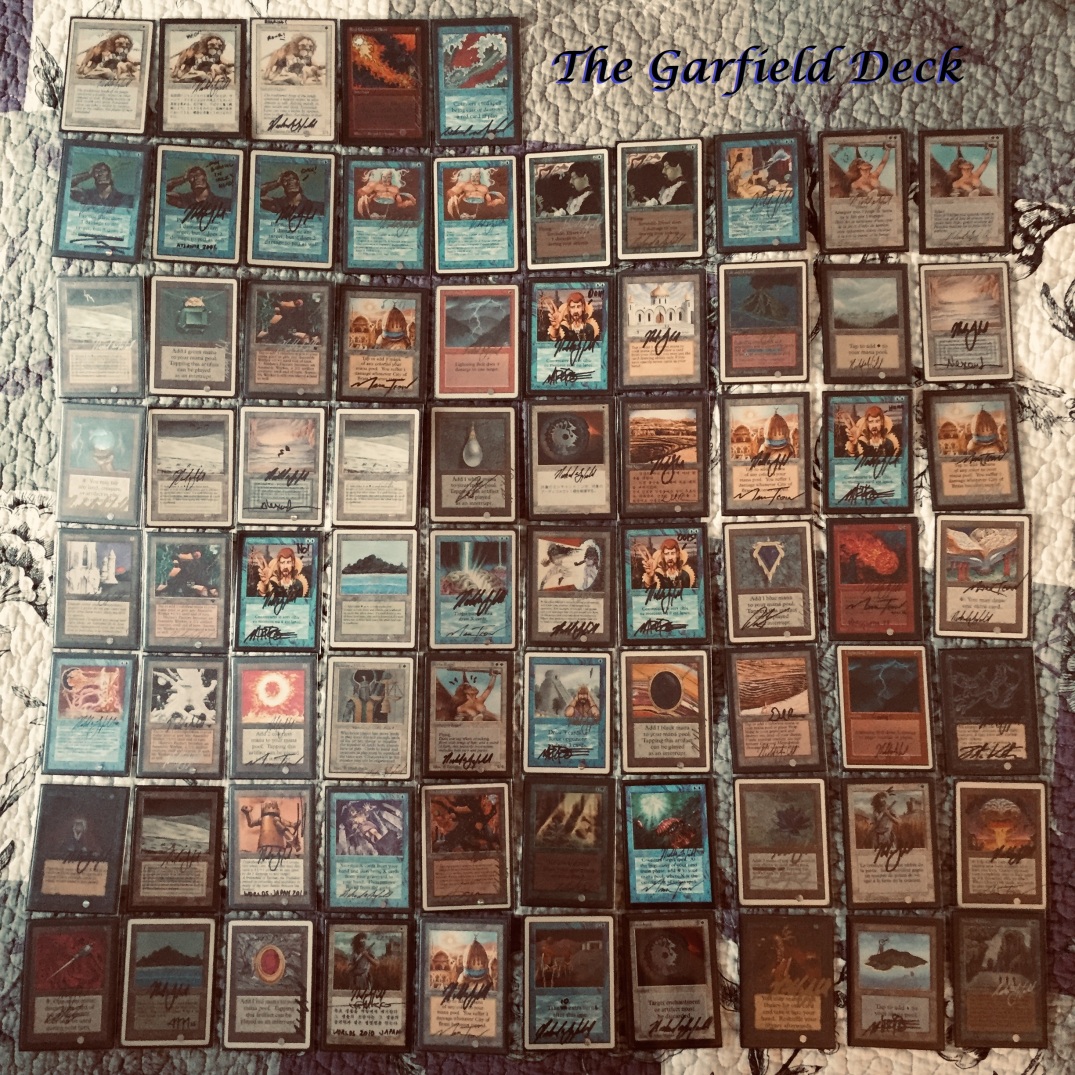 Today is Friday the thirteenth, what a lovely day for an update!

The hard part is over, my Cube now features more than half of the cards with Richard’s signature, and it feels like a tremendous achievement. I don’t know whether I’ll finally reach the 100% one day, but I happen to be a very optimistic person so, we’ll see!

Also, I had the pleasure to play an Old School deck 100% signed by Garfield during Montreal’s Tundra Wolves Challenge, third edition, which took place on March 7th.

I called it “The Garfield Deck” (yeah, how creative, I know.) and the deck pic is featured at the top of this very post.

I had a blast there, and I actually went 4-2, which isn’t too bad for a deck I didn’t playtest at all. Most of my opponents were really surprised after I told them the challenge I had set myself for the deck creation!

It’s been almost ten months since the last update (the baby is doing really well, thank you!). I’ve had the chance to add 70 new cards to my collection since then, including several VERY exciting pieces for the cube:

Yeah, I also decided to modify the printings allowed in the Cube, and now the extensions range from Alpha until Visions. The more the merrier, right? Plus, these do still have a pretty neat “Old School” feeling to me, in the end. Not sure if I’ll ever cross the line and make it up to the Tempest block… but who knows.

One last thing, I’d like to thank in particular the people who agreed to trade Garfield-cardboard for other Garfield-cardboard, it was a very cool adventure and I hope I can experience this again in the future!

Take care (and wash your hands!), 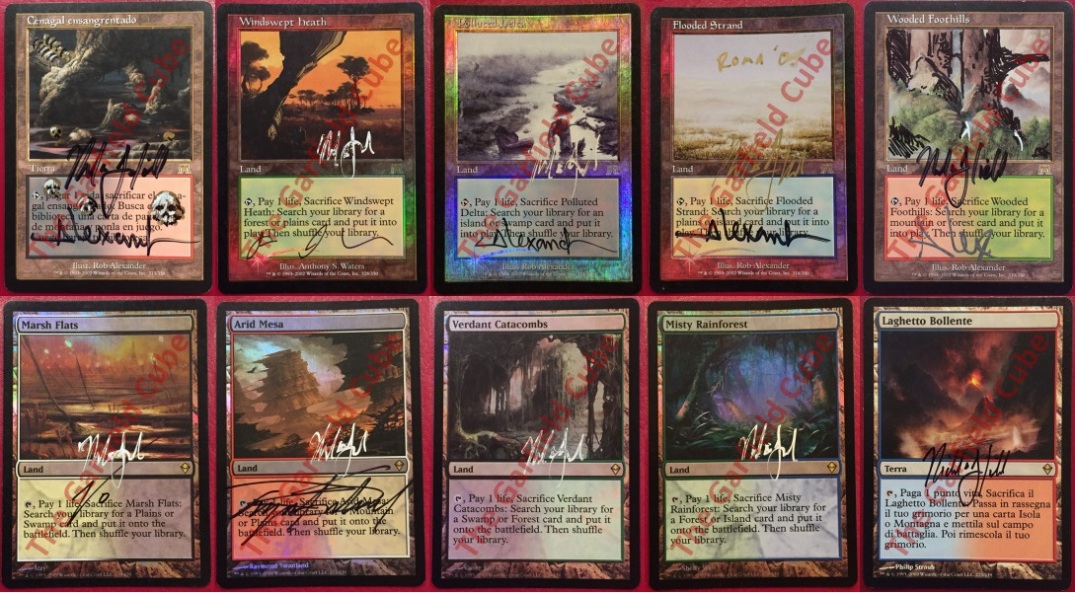 I just realized a couple weeks ago that I also own one of each OG fetch land, and this is definitely worth mentioning!

On a side note, my partner is expecting our first child this summer so I will probably put this project on the side for a while… But I’ll definitely be looking for new additions! 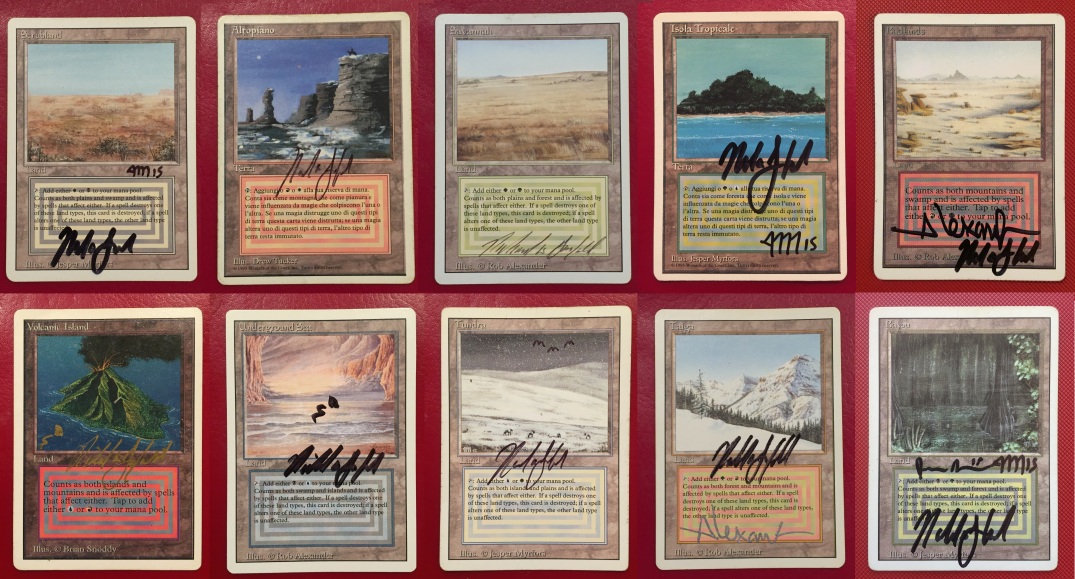 Yeah, I had to wait the day after April’s fools to post this update…

Otherwise I wouldn’t have believed it myself – one of EACH dual land? Seriously? Did it really take 15 years to achieve?

And it does feel super good.

So long story short, the blog is up to date!

I am still working on the final list, but it’s pretty clear now that the Cube is actually a 1993-1996 era build, from Alpha to Alliances (sorry Mirage but not sorry, you don’t feel “Old School” enough to me).

I received some amazing gems since Christmas, but I also had to get rid of 3 Mishra’s Workshops to finance all this. All in all it was a pretty exciting experience!

Here is the comprehensive list of the recent finds: 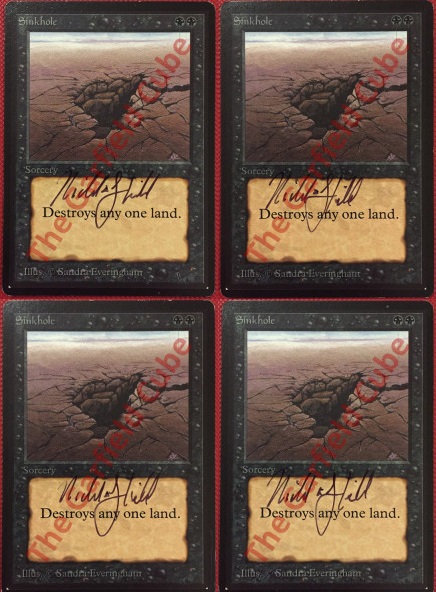 First of all, a big update is coming soon: I’m going to change my Cube project into something more specific…

The list is already finalized and approved (see the appropriate page on this blog) but I still need to reorganize the content of the pages. Probably in a couple weeks from now, I guess.

I’ve also received some new additions to my collection since my last update:

This is a text widget, which allows you to add text or HTML to your sidebar. You can use them to display text, links, images, HTML, or a combination of these. Edit them in the Widget section of the Customizer.